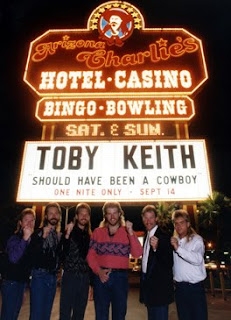 I've been going over this list in my mind since we last talked... Here's what I've come up with.

4.some song I heard the other day about NASCAR. Don't know the name of the song or artists but it was an abortion of music. I know I'm not giving you much to go on, but I think that much like a person with a traumatic childhood, I've blocked it out.

3.I hope they have wifi In heaven- Robert Earl Keen jr. This one hurts so bad because it came from someone so trusted. It's like getting stabbed in the back by your grandma. I'm not sure if that's the real name of the song.But it's something like that.

2.."comin to your citay" big n rich these guys are killing music and making a mint at it. It kills ME that just because they sing at the same time, people think they are harmonizing. They aren't. Harmonizing involves harmonies, which involves a little basic knowledge of music.
1. She thinks my tractors sexy- Kenny chesney. God do I hate this song. It's the epitome of "let's write a song we can sell to small town america" it's not art. It's as much genuine music as mcdonalds is genuine hamburgers. Sure people like mcdonalds..but people also listen to Kenny chesney and wear shirts with tinkerbelle or the 7 dwarves on them. They think 2 1/2 men is funny and their favorite books have spy vs spy in them.

**I typed all this on my iPhone so please excuse any and all typos.

So, I agreebwith your list whole heartedly and could have very easily chosen any of those songs.

Been eagerly anticipating a jive and you did not disappoint.

I would say that that in general I dislike any song that:

* includes catchy lyrics and phrasing that seeks to capitalize on patriotism, a national tragedy, or a war. They give me tired-head and insult my intelligence. Before mentioned Toby Keith should receive mention for his diatribe "Courtesy of the Red, White and Blue". Of course there are exceptions: i.e. Proud to be An American by the great Lee Greenwood. I believe Mr. Jivemaster will agree with me on that one.

* Includes a teenager singing a song with deep meaning. I need to envision lyrics being sung with passion endured through life experience, not being read off of a sheet.

* Is a country song being sung by a person or band not properly attired in country fashion. I mean just humor me and throw on some boots or a cowboy hat. Otherwise it leads me to believe you couldn't make it as a rock star so thought you'd just give country a try...us Southerners are just a bunch of hicks anyway and won't know the difference. Unfortunately its worked for many...not just talking about musicians either


Rule #1 states: Thou shall not push someone in a pool who is fully clothed. Shoutout to Kirk Mike. --- HOY!

If only the #2 song on your "worst songs" list had been around when the second wife who shot Trace was charged. I speculate that it could have been used as pretty strong evidence in her defense that he needed to be shot. I know it would have given me something to think about if I were on the jury.

Video Joe's rules are straight on. As a recipient of all 3 I can say nothing is more humiliating and angering than being pushed in a pool clothed. This should end the party. Not for you but for everyone. Holler, cuss, and generally create as much meyham as possible until everyone goes home. The point should be made that this in unacceptable at any time. Kirk