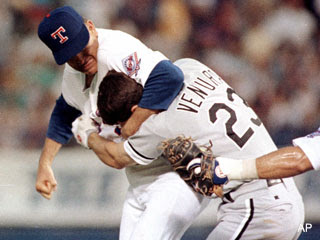 "Baseball? It's just a game. As simple as a ball and a bat, yet as complex as the American spirit it symbolizes. It's a sport, a business and sometimes even a religion." - Ernie Harwell

I am what you call a "Die-Hard" Texas Ranger fan. Some might consider this to be quite peculiar given that I only casually follow other sports. The only other team that I will watch is the Dallas Cowboys and sometimes I find that to be trying on my time and patience. It has never been that way with the Rangers. Opening Day was about a week ago and with the dawn of a new season comes the optimism that maybe this is the Rangers'year to go all the way. I've had these feelings of blind hopefulness at the beginning of each season for the past 20+ years. You would think that I would have learned my lesson by now. I haven't...despite C.J. Wilson's best efforts.
For a guy who always "demands satisfaction", my team has often left me drowning in the vast seas of disenchantment. In the two decades that I've been a fan, I have definately endured more than my share of disappointments. From watching my team miss the playoffs every year since the turn of the millenium, to being sassed by shortstop Jeff Kunkel at a baseball card convention (I was 9 yrs. old, you pr__k!), there have been some trying times. There have been so many nights where I foolishly stayed up until the early morning hours only to witness the Ranger bullpen blow a 3-point lead and lose the game 15-14. Instead of enjoying my third peaceful hour of sleep, I remained awake, strangling my pillow and cussing Cordero's name."Why CoCo, why?"
As a life-long fan, other bad memories would include:

True, there have been some bad times that have almost jaded my otherwise optimistic outlook on each new season. But to be fair, the Texas Rangers have given me countless memories that will stay with me for the rest of my life. Most of these memories involve my chilhood hero, Nolan Ryan.

There have been many great memories such as:

O.K., so what happened with Jeff Kunkel? After asking for his autograph, I told him that I was going to be at the game that night and wondered if he would throw me a ball. Kunkel gazed to his left and then to the right as if he was looking out at thousands of fans that would be packing the stands. And with a roll of the eyes, he sarcastically said, "Will I throw you a ball? Sure, kid....if I see you at the park I will throw you a ball." Reading his response does not accurately depict the amount of condescension that filled this verbal exchange. Granted, it wasn't as bad as former Boston Red Sox's leftfielder, Mike Greenwell telling my brother to "git" (as in "get away from me"), but it still stung quite a bit.
In conclusion, although the Rangers have frustrated the heck out of me for years and years, I will stick with them no matter what. I have to. That's what Die-Hard's do.
So who are my Top5 Texas Rangers? Lets see:

P.S. I forgot one more memory. I have been trying to upload a video of an undeserving member of my family who won $25,000 in the Sonic Slam Inning. I've tried and tried to upload it but it wasn't meant to be. Maybe my Webmaster will be kind enough to showcase it in the Top5 Drive-In someday.

Until next time...
Demand Satisfaction,
CWC