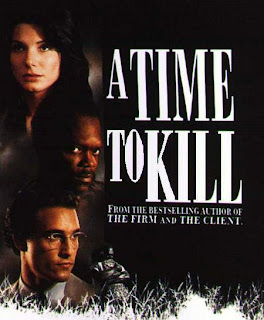 If it is true that The Godfather is the sum of all wisdom, refer to the opening scene of Francis Ford Coppola's 1972 Masterpiece. In it, the local undertaker looks to Vito Corleone for revenge on the two guys who raped his daughter and left her for dead. As he whispers into the Don's ear, we deduce that the guy wants The Godfather to have them killed for what they've done. "That I cannot do", says Corleone. "Your daughter is still alive. That's not justice."In A Time To Kill,the offensive, morally objectionable, sweaty movie from Joel Schumacher starring Matthew McConaughey, Sandra Bullock, and Samuel L. MF'n Jackson, the The Donald Sutherland character says, "If you can win this case...justice will prevail...but lose and justice will also prevail." Nuh-uh. This philosophy certainly contradicts the sentiments of one of the greatest movie characters to ever grace the Silver Screen. This is enough proof that A Time To Kill's logic is flawed.

Here is a movie that is so well-crafted that it successfully fools the movie-going public into thinking that the beliefs held by its characters are shared by your average American living in the Southern region of the United States. "Everybody knows that a black man can't get a fair trial in the South", this movie suggests. Oh really? I wasn't aware of that. But then again, if I was a juror, race would not weigh in on my decision on guilt or innocence. I would analyze other factors such as eye-witness testimony, the defendant's courtroom demeanor, and the indisputable evidence presented in court before choosing a verdict. This movie tries to make it perfectly clear that if the Black defendant draws an all White jury, he is sure to "hang". If he draws an all Black jury, he is sure to "walk". Nobody in this movie seems to disagree with this ignorant generalization about racial predjudices in the South. You mean to tell me that there would not be ONE sensible juror who happens to live in the South who would judge without prejudice?

The Plot (in case you have not seen the movie):

After his daughter is raped and left for dead by two rednecks, Carl Lee Hailey (Samuel L. Jackson)takes matters into his own hands and murders the two degenerates in cold blood. Hailey felt like he had no other choice but to blow them away with a machine gun in a crowded courthouse...while their mother looked on in horror. Apparently he thought that since the two suspects were white...and despite that there was so much evidence against them that even Chris Darden and Marcia Clark could score a conviction, they would still "Beat the Wrap" and be found innocent. He then enlists the services of a Hotshot, young, sweaty lawyer named Jake Brigance (McConaughey)in hopes of him being able to sway a jury full of buffoons that Carl Lee should not be punished at all.

Not to "put on airs" like I'm Steven Seagal or anything, but if I ever find myself in a similar circumstance, I hope that I could find my way to the perpetrators and provide Swift Justice with a pair of plyers and a blow-torch (shoutout to Pulp Fiction) before the cops can lock them up. If I decided that their horrible crime against my family deserved the ultimate punishment, I would understand that my murderous action would undoubtedly reserve me a room at the Grey-Bar Hotel for an extended stay with no check-out day in sight. I would know that goin' in. I would not go to trial and proclaim my innocence when half of the town witnessed me committing the crime. If I was the Judge in this case, after asking the defendant how he pleads, I would find it very difficult not to respond like Michael Corleone did after informing Carlo that he had to answer for the death of Santino - "Don't tell me that your innocent. It insults my intelligence...makes me very angry".

The most offensive scene in the movie takes place near the end of the picture as The Sweaty Young Lawyer gives his closing argument in defensive of his client. Here is an exerpt of his speech:

Jake Tyler Brigance: [in his summation, talking about Tonya Hailey] Now comes the hanging. They have a rope. They tie a noose. Imagine the noose going tight around her neck and with a sudden blinding jerk she's pulled into the air and her feet and legs go kicking. They don't find the ground. The hanging branch isn't strong enough. It snaps and she falls back to the earth. So they pick her up, throw her in the back of the truck and drive out to Foggy Creek Bridge. Pitch her over the edge. And she drops some thirty feet down to the creek bottom below. Can you see her? Her raped, beaten, broken body soaked in their urine, soaked in their semen, soaked in her blood, left to die. Can you see her? I want you to picture that little girl. Now imagine she's white.

WHAT??? Imagine she's WHITE? WHAT? If I were a juror, I would be held in contempt of court after my violent outburst after being treated so disrespectfully. It is offensive to me that someone would think that the race of the victim would play any part in my decision. I would have to demand an apology.

In the film's climax, a kid busts out of the courtroom and exclaims, "He's innocent"! What? The closing argument worked with those 12 Bozos? What? No second-degree murder, no involuntary manslaughter, or not even reckless endangerment? Whaaaaat? If I were the Keifer Sutherland character (who's brother was murdered), I would be floored with disbelief and filled with anger and hatred. I would be Fred Goldman - mad. I would be madder than Hall of Famer George Brett in the Pine Tar Incident* - mad. I'd be madder than Chris Farley after finding out that someone switched his coffee - mad. Mad. I would have to be escorted out of the courtroom like DeNiro in the Untouchables (1987). Realizing that American Justice had failed me, I would be forced to incur it on my own. Carl Lee Haley just got away with it so why couldn't I? This is the irresponsible message that A Time To Kill gives us.


Even though I disagree with this film's message, I must point out that it is a very entertaining movie that engages the audience from start to finish.It definitely has its opinions. Just remember that The Godfather always knows best. 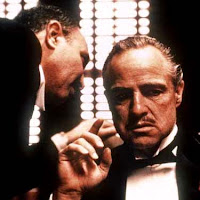 I'm a fan of Charles S. Dutton who plays the local sheriff/chief of police in this movie. Here are my Top5 Movie Sheriffs...

5. Tommy Lee Jones as "Ed Tom" in No Country For Old Men

2. Michael Parks as "Earl McGraw" in From Dusk 'Til Dawn among others


*This is just about as mad as anybody can get...


BTW, You might wonder why I decided to voice my disdain on a movie that was released over 14 years ago. Well....recently I was rummaging through the $5 pile of DVDs at Wal-Mart. I found it, bought it, watched it, and hated it. Then I just decided to write about it. (In Forrest Gump voice) I just felt like writing....

Posted by Christopher at 8:40 PM 7 comments: