I always thought it would be fun to work at Blockbuster for the sole reason of having the opportunity to suggest DVDs for the movie-loving public to rent. So I got to thinkin', I have the forum to do just that (sorta) right here at Top5.

Here's the plan: I want to offer my suggestions to those of you who want an entertaining movie to watch but don't really have an idea of what to choose. And don't worry, I'm not going to recommend some "Artsy" film such as Fellini's 8 1/2 or Gus Van Sant's My Own Private Idaho. Instead, I want to turn you on to Great Films (IMHO) that I'm pretty sure most everyone would enjoy.

I've selected my first two choices b/c they are fresh on my mind. My suggestions are... 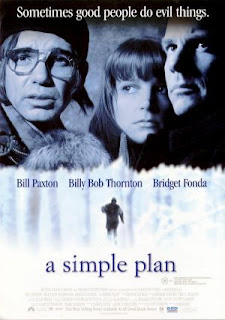 Three men come across a downed plane in the snowy woods of Minnesota. They find a duffle bag with over 4 million dollars inside. Finders, keepers? Maybe. But first they'll need a foolproof plan. So the three men start out with a scheme that's perfect in its simplicity....and lethal in its miscalculation of the human heart. Mistrust, murder, intrigue- are all soon at work in this stark, twist-filled thriller. (almost copied verbatim off the DVD)

This movie hooks and reels you in the first five minutes. Billy Bob is brilliant in his role as a slow-witted bumpkin in which he was nominated for the Best Supporting Actor Oscar. Even "Fort Worth's Own" Bill Paxton, who I don't consider to be a good actor, delivers with a fine performance as well. However, I was mostly impressed with the performance of Brent Briscoe, who plays a Town Drunk so convincingly. It was an underrated performance by an actor who is still a virtual Unknown to most people. 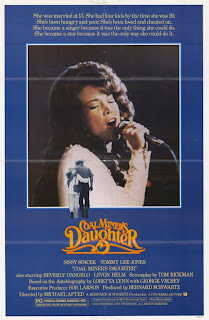 From www.imdb.com - At only thirteen years of age, Loretta Webb marries Doolittle Lynn and is soon responsible for a sizeable family. Loretta appears destined to a life of homemaking, but Doolittle recognizes his wife's musical talent, and buys her a guitar as an anniversary present one year. This gift sets Loretta Lynn on the gruelling, tumultuous path to country music greatness.

I usually enjoy Biopics about as much as Allen Iverson likes PRACTICE, but this movie is an exception. Sissy Spacek is terrific in this Oscar winning role. She sings all the songs on her own. Jaime Foxx didn't do that.

Anyway, Loretta and her husband Doo's relationship is what makes me love this movie. I laughed everytime Doo called Loretta "ignorant". "Are you so ignorant that...."

Usually if Tommy Lee Jones is in a movie...it is worth watching. Well...unless we're talking about Volcano.


Anyway, those are some of Top5's Favorites. If you decide to watch one of these movies and feel the need to discuss it with somebody, feel free to email me. We'll converse.

Posted by Christopher at 8:10 PM

I will be so bold as to say Tommy Lee Jones is my favorite actor. Yea, thats right...I said it. Not that he ever really made any bad choices, but he is at the Clint Eastwood point in his career where now if he selects a role you know the movie is going to be good and the role will fit him.

Lyle, did you happen to catch Jones showing off his acting chops in Man of the House? A tour de force, a true actor's showcase in what has to be a modern day classic.

No I missed that one Brent.

But need I remind you of Clint Eastwood's foray into musicals in "Paint Your Wagon Red" (Lee Marvin, I forgive you too) and as a friend to a chimp in "Every Which Way but Loose"? I thought I quantified my statement with the word "now" he is at a point in his career where he can choose roles that epitimize his talent, but even with that statement I do not want to diminish what he accomplished in much of his earlier work.

Brent why don't go watch an art flick with no storyline, plot or dialogue and attempt to read into the subtlety of the script with the hope of being emotionally moved in a way that you thought you could only experience through the touch of another man.

Looks like Brent learned not to spar with the Muhammaed Ali of the written word. You gonna let him get away with that, Bronco?

Loretta is one of country music's all time greats and a real sweetheart.

The first time I met her was after a big show at the Anaheim (CA) convention center with Conway Twitty (about 1973). Conway had done an hour, Loretta had done an hour and then they did an hour of duets.

After the show, I went backstage and talked to Conway for a few minutes and then went to Loretta's dressing room. She was sitting on the counter with her acoustic guitar, singing a special song for a blind fellow whose life's ambition was to meet Loretta Lynn.

I've met many country music stars of the 60s and 70s, and Loretta is, very simply, special. Regardless of her well-deserved fame, she's never lost sight of her roots and her fans. She's always the same person -- a country gal who loves singing for folks and loves talking to them.

Doo was a real classic too. I'll never forget the time I called Loretta's room at the Sheraton Universal and Doo answered the phone.

I said, "Can I speak to Loretta?" Doo's response was, "Loretta's in the tub right now and cain't talk to y'all. Can y'all call back in about 15 minutes?"

Wonderful people, both of them.

One thing I forgot to mention.

Many folks felt like I did because they only remembered Sissy Spacek from the movie "Carrie". As I did, folks wondered "How the hell is she going to play Loretta Lynn?"

I didn't go to see "Coal Miner's Daughter" until I heard that Loretta had left a screening of the picture with tears streaming down her face, saying "Yes, that's my life. That's my story."

If you're a Loretta fan, and you haven't seen CMD, see it. Sissy gives a wonderful performance and it has Loretta's approval.