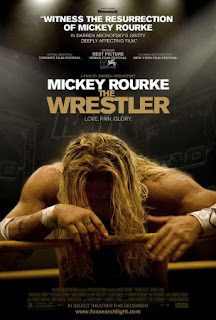 I had my Jive planned out. Even though the 81st Academy Awards were held two months ago, I still wanted to voice my disappointment over Mickey Rourke not winning the Best Actor Oscar for his awesome, true-to-life performance in "The Wrestler." I was then going to delve into my personal preferences and what I felt constituted an acting performance being labeled as "Great." I was gonna elaborate by suggesting that a performance was more impressive to me when the actor developed the character out of his/her own imagination...unlike Jamie Foxx in "Ray", which I considered to be a glorified impersonation. I was gonna cite all of my favorite performances such as Robert DeNiro in "Taxi Driver", Bill Murray in "Groundhog Day", Diane Keaton in "Annie Hall", Nic Cage in "Adaptation", Daniel Day-Lewis in "Gangs of New York" etc etc...none of which portrayed a real-life character with a plethora of footage to mimic. And no, Charlie Kaufman doesn't count and Donald Kaufman wasn't real. There was a good chance that somewhere in that Jive I would have more than likely digressed by stating that I was not impressed by an actor receiving an Academy Award nomination based on "physical transformation." I would have cited Tom Hanks in "Cast Away" and defended Mickey Rourke by telling you that he has always been muscular. I was really gonna talk some Jive by stating that Joaquin Phoenix's portrayal of Johnny Cash and Philip Seymour Hoffman's impersonation of Truman Capote couldn't hold a candle to Bill Murray's in "Lost in Translation." It was gonna be quite obvious that I didn't respect these so-called "great performances" where an actor studied a subject and imitated them on screen. What has changed? Well...I recently saw Sean Penn's performance in "Milk." What an inspiring, moving, and splendid performance that was. It was one of the decade's finest. I will say that. 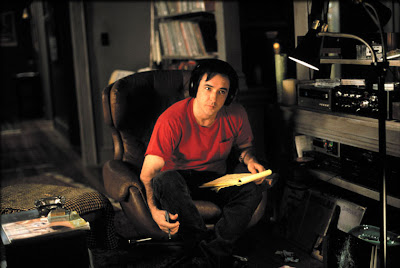 When I first became interested in music, what are the Top5 albums that I listened to the most? Hmmmmmm.......

Since this Jive is once again going to be about music, I've developed a playlist on my CPU to get me in the mood. "Baby, I Love You" by the Ronettes is playing now and if I can't be inspired by hearing the voice of Ronnie Spector then I need to go do something else. I think I'll stay put.

The making of a good compilation tape is a very subtle art. Well...it was a subtle art. I miss the days when we used someone else's poetry for our own artistic expression. To be certain, burning MP3s to a CD and giving it to someone is in no way as meaningful as making them a tape. Nowadays...well actually for the past 10 years, all you have to do is click, drag, and burn. It takes 10 minutes.

Anyway, Back in the Day (the 1990's), when you made a person a tape, it meant something. Not only did it mean that you were willing to spend at least 2 hours (not counting the time spent planning) in creating something specifically for their enjoyment, but also that you respected their tastes in music and felt the need to turn them on to something new. A well-informed mix tape with a romantic subtext was a great gift for that special someone. More on that later.

When we made tapes, it seemed as though we had a little something to do with creating the music. After all, it was a creative endeavor that required the utmost care and precision. Anyone who ever made a compilation tape knew that there were rules and guidelines to follow. In one of my Desert Island All-Time Top5 favorite movies, High Fidelity, Rob Gordon (played by John Cusack) lays out his rules to follow. I'm not going to put in the DVD right now to quote him verbatim on what his rules were, but I remember that they were in tune with mine...so to speak.

As Crosby, Stills, and Nash sing "Teach Your Children",, I will give you my personal rules to follow when making a great compilation tape.

But before I do, I must say that it would be useless to have followed the guidelines if you allowed for the tape to have a "Glitch" between the songs. This dreaded sound came from trying to record over another track and not rewinding far enough. This horrible sound would ruin the flow of the tape. It was unacceptable.

Anyway, the first song needed to be a recognizable attention-getter. It needed to be something catchy...something snappy. I would usually slow down the pace with the second song. I often found that a movie quote fit well between the second and third track. It was very difficult to record a movie quote back then. You would have to use a hand-held cassette recorder and place it close to the speakers of the T.V. You would have to rewind the tape in the VCR far enough to give you enough time to press record on the cassette player. Now the third song was the one that I considered to be the best tune on the tape. This is the song that inspired you to make the tape in the first place.

It was always necessary to "go out on a limb" and play some unknown songs that fit within the theme of the compilation. Before I go into this, I want to fill you in on the importance having a theme for your tape. The songs did not necessarily have to be within the same genre but they all needed to have a common thread. For example, it would be totally unacceptable to make a tape featuring both "Daydream Believer" by the Monkees and "Paper Planes" by M.I.A.

Anyway, back to "going out on a limb." It was necessary to do this but you had to be careful and not play more than three in a row. A strategically placed "Side 1 Track 1" was needed between them to insure listening enjoyment. If the recipient became bored, your tape failed. It is the same philosophy that I have for bands who are just starting out. They should play a recognizable cover song for every two originals.

The last song on the tape's purpose was to sum up the overall vibe of the previous 117 minutes of music. If that was too difficult to accomplish, I at least wanted to end with a great song that would leave them wanting more.

I forgot that I put "Story of My Life" by Social Distortion on my playlist. I'm a rockin' and a typin'...

I mentioned earlier the effectiveness of a well-informed mix tape with a romantic subtext. This was my favorite kind to make. When I say "well-informed", it means that the tape-maker knew the recipients favorite songs and tried to incorporate them into the compilation. The goal was to smoothly transition their favorites with well-known love songs without straying too far from the overall feel of the tape.

Most of us were never able to be that guy who played guitar and sang "Oh Donna" to his girlfriend from a phonebooth, but making them a tape was the next best thing. When your girlfriend listened to the tape for the first time, she recognized that you had paid attention to her tastes in music and knew what her favorite songs were. She also understood that when she shed a tear after hearing "I Cross My Heart", that it was your thoughts channeled through the pleasing tones of George Strait's voice. Tell me that didn't mean a little somethin'.


Here are my Top5 albums that I listened to the most after first being introduced to music. I'm not going to exclude Greatist Hits.

Until Next Time....
Demand Satisfaction,
CWC
Posted by Christopher at 2:58 PM 18 comments: