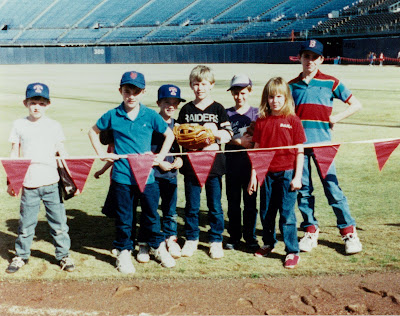 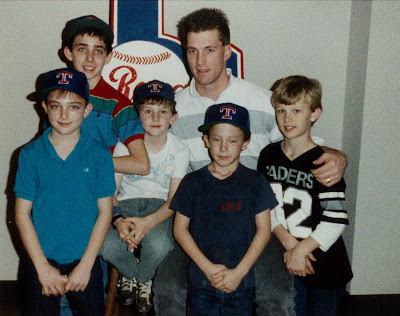 Today is a very special day in the life of a Texas Rangers fan. No, I don’t mean those greenhorn sorts that started wearing a Rangers’ hat 2 weeks ago. I’m talking about those of us who have truly LIVED life as fans. Those of us who have grown up with the Rangers in our homes and experienced the anxiety of waiting for a World Series. And, coincidently, wondering if it would ever happen in our lifetimes. As any sports fan will admit, there is a certain level of nostalgia that accompanies their “team’s” road to victory. After success, it is only natural for fans to acquire a sense of entitlement in their belief that they somehow contributed to the triumph. And, yes, I too am going to go down that road. Well, not just myself, but also my family. See, I grew up with two younger brothers and 7 close knit cousins, all of which were Rangers fans. The “Cousins”, as Toby Harrah labeled us, were staples of every Texas Rangers event during the mid-80s to early 90s. Countless miles traveled to games, baseball card conventions, and autograph sessions have attributed to oodles of stories, and coincidently die-hard fans. I feel that this World Series is for the “Cousins”. We earned it because we LIVED it.

Let me start by stating my belief that baseball is a dying sport. Don’t believe me? Ask any 5th grader who Joe Maurer is and see what you get. Hell, ask them who won the batting title in the American League last year. Follow it up by asking to see their baseball card collection. In a world where we have a million different components competing for our attention, the game of baseball seems to have fallen behind. We live in a fast paced society, with short attention spans, and a general desire to appreciate only what is sexy. Baseball is not sexy – but it is beautiful. I don’t need to go into a melodramatic description of why, but it is. And I believe that the only way to find beauty in the game is to LIVE it. Well, the “Cousins” have certainly done that and my Top 5 Jive will examine some of the moments.

On July 31, 1990, Nolan Ryan recorded his 300th victory against the Milwaukee Brewers. I don’t need to look up any of the details of that particular game because I remember it crisply. I watch the game with all of the “Cousins”. See the day before, our Grandfather had passed away and we had come together as a family. Like most kids, we all had different emotions and were dealing with them in our own certain ways. But there was a brief moment where we were able to escape reality. None-the-less we came together, as a family, amongst the mounds of food that neighbors from the community had brought over, and cheered for Nolan to get the victory. He did, and in a way it felt like he did it for us.

I tell the previous story, not to dramatize, but to paint a picture of how important a singular game was to me. How important it was to the “Cousins”. And there are more. Many of which are extremely insignificant to most, but not to us. In ode to the Top 5 Jive, I have comprised my top 5 list of fondest Rangers memories. Coincidently, they all revolve around the “Cousins”. Funny how that works.

1. How Frank nearly changed the history of baseball by trying to get an autograph.
On the day that Nolan Ryan was expected to record his 5000th strike out, Arlington Stadium had the fortune, or misfortune of having the “Cousins” in attendance. After several attempts to get Nolan’s attention while warming up, Frank decided that he would throw the baseball that he wanted autographed. Without warning it one-hopped from the outfield bleachers and hit The Express in the shoulder. No harm was done, but crazier injuries have been inflicted. In typical, stoic, Nolan Ryan fashion he picked up the ball and threw it back.

2. Advise from a former Knuckleballer.
While getting an autograph from Bobby Witt, Jimmy Ray Kostiha, who had experienced glory as a Gordon Longhorn baseball pitcher in the 60s, sat the struggling pitcher down and gave him a motivational “talk”. We have all had the “talk” with JRK and know that there are no boundaries that prohibit the conversation. No one knows exactly what was said, but Bobby Witt went on to win 12 and 17 games the following two years. He also experimented with a knuckleball to no avail.

3. Showing Love for your favorite Ranger with a Mullet.
Idealizing your favorite Ranger is normal for a 10 year old kid to do. Until you look back and realize that you cut your hair into a Mullet, because of Steve Buechelle. Certainly the history of baseball will not show in influx of mullets because of this particular player, but any photograph from 88-91 will show myself proudly supporting one. BTW – I also named my first dog after him.

4. $25,000 Grand Slam
When Frank’s name was called during the Sonic Grand Slam inning, there was a certain feel that something crazy was going to happen. It was midday on the 4th of July and we were watching the game at our house. The Chamberlains were watching at theirs, which was just down the block. What I can remember is running down the street screaming like a banshee all the way to Frank and Chris’ house, where we proceeded to dance in the middle of the living room. You would have thought “Crazy Game of Poker” was playing.

5. Juiced gives Lyle a game ball.
Every kid who has the fortune of catching a ball at a baseball game will never forget it, especially when it is from Jose Canseco. In the center field bleachers Canseco saw a joy-filled little guy pleading for a ball and made it a point to throw him one. A bully, who was at least twice his size, jumped in front of Lyle and took it away. Canseco could see the disappointment in the young fans eyes and sternly told the bully to give it back, which he obliged. I’ve always though a lot of Canseco because of that moment.

As you can see the Texas Rangers hold a special place my heart. You ask if I’m excited that they will be playing in the World Series. Damn right I am!!! But for reasons that supersede the normal fandom that follows a winning hometown team. Win or lose, we have LIVED Rangers baseball.