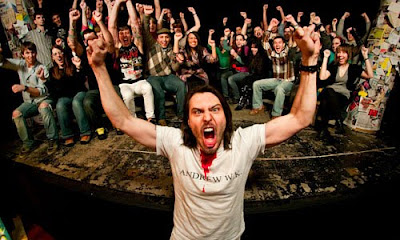 Five years ago next month, I walked into the ER at Harris Methodist Erath County hospital with a horrible right shoulder dislocation. After about four or five injections of anesthesia, I finally blacked-out long enough for the doctor to thrust my shoulder back into place.

I had broken the ball in my right shoulder (a knob-like "capitulum" on the lateral side - thanks innerbody.com) that helps the arm rotate. I remember seeing my bicep muscle displaced somewhere near my armpit. I was told that I could never do military presses again but was shocked when even after five years, I still could not do proper bench presses or even throw a baseball. Ask K. Pevey (shoutout) how embarrassing it is to have an infielder on your team who has to throw under-handed from base to base. Up until three weeks ago, I sometimes even had discomfort sleeping on my right side.

So what happened three weeks ago?

As I was reaching for my toothpaste for my morning brush, I heard a "pop" and felt a slight shift in my shoulder. Something felt different. Was my shoulder somehow fixed? It felt like it. As I looked in the mirror, I strummed an Air Guitar; mimicking Pete Townshend's windmill motion with full painless rotation. I threw a right-cross and a haymaker to a fictional opponent as if I was Soda Popinski. No Pain. After I went into the full wind-up and hurled a fictional 100 mph fastball w/ a loud grunt, imitating Nolan Ryan, I knew that I'd been healed. At that moment, I realized that I had been living my life for the past five years with my shoulder somewhat out of place.

Last week, as I headed to SXSW in Austin, I was looking forward to a few days of chillin' in the home that my buddies had rented out for four days; not caring as much as they did about seeing the Indy Rock acts who would be showcasing their talent on 6th Street. On Wednesday night, I began hearing rumblings about the possibility of Hard Rocker, Andrew W. K., appearing at Buffalo Billiards. I had been a huge fan of his since my days as an Under-Grad. After I earned my Masters, I went as far as inviting the White-Jeaned Party Machine to my graduation party.

Back in '04, fans could email A.W.K. with party invitations. He would often choose a party to crash, while bringing along a camera crew for a show he had on MTV (If my memory serves me correctly). I thought that it would be cool for him to attend my "Graduation Bash" with me and a couple other guys. Shockingly, I never got a response.

Anyway, I wasn't positive that Andrew W.K. was really going to be there. I heard rumors that he was going to "make an appearance." Beyond that, there was only a $5 cover charge. However, I began to suspect that the rumors were true when over the loud speaker, a voice recording repeated: Party, party, paRTY, PARty, PARTY, PaRtY at different tones and volumes for well over 5 minutes in preperation for the night's Main Event. As Andrew W.K. hit the stage like a hurricane, the crowd went nuts....some more so than others.

It was some time during this awesome two-hour Rock Show that I decided to try something I've always wanted to do...Stage Dive and Crowd Surf. I've since learned that there are some things a 200+ pound man should only dream about and not actually attempt.

As the Mosh Pit overtook the stage, a few fans hoisted Andrew W.K. on their shoulders as he sang/yelled "She is Beautiful". At this moment, I found myself at Center Stage with the spotlights shining down on me. This was my moment. With both arms raised in the air, I gestured to the crowd - much like Jimmy "Superfly" Snuka before his famous aerial theatrics from the top of the steel cage in his match with Don Murraco at Madison Square Garden in '83. I then executed my own version of the "Superfly Splash" on to the crowd of headbangers below. With all of their strength, they managed to hold me up for about three seconds until I was callously dropped to the cold, hard concrete floor.

My first instinct was to ask a friend to call for an ambulance. Feeling as though I might be horribly injured, I imagined what the doctor's reaction would be after I was stretcher-ed out of the muck and into the emergency room. "Son, you must have sh*t for brains to go out and pull a stunt like that", I figured the Doc would say to me in the most condescending way imagineable after I told him how I'd managed to break my back.

After I realized that I was being trampled like D.F. at the Boars Nest circa 2001, I managed to get to my feet. Maybe it was A.W.K.'s "I Love NYC" where he changed the lyrics to where he loved Austin, TX that brought me back...I dunno. Regardless, I jumped to my feet and back on the stage as fast as Jack Nicholson could in "Wolf". Suprisingly, I wasn't as hurt as I originally thought. However, as I began double fist-pumping again, I felt a sharp pain in my right shoulder. It was a pain that I had felt before.

The next day, I heard the same popping sound in my shoulder that I felt on that miraculous morning three weeks prior. Only this time, pain followed the "pop." I tried the Townshend Windmill and only made it half-way around before I writhed in pain. Yep, my shoulder was back to "normal." Back to having to toss baseballs underhanded like a girl, back to having to throw Ric Flair chops instead of haymakers (w/ all due respect), and back to not quite being 100 percent.

But hey, it only cost 5 bucks and I partied hard w/ no regrets. My re-injury was a small price to pay to see Andrew W.K.....

4. Party Hard - In this song, A.W.K. wants you to PARTY to the best of your ability.

2. Gotta Do It - In this song, A.W.K. lets us know that even though you may have partied too hard, you need to suck it up and continue to PARTY at the same speed.

Posted by Christopher at 7:10 PM

As a fellow attendee at the aforementioned concert who also left the show injured (it still hurts to move my right thumb, darn it)I think I'll list 5 more songs whose titles accurately describe my concert experience...

Finally...let's see if anyone can match the following songs to the corresponding member of our group..

*Let's not actually name names here, just think about it to yourself:)

While we were partying hard with Mr. WK, this was going on across town...

this was the best post that you have had....caught myself laughing at the cpu....