A Jive For The Weary Kind 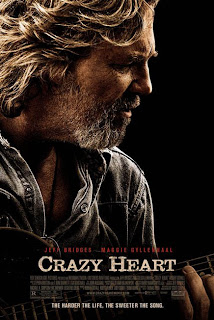 As I sat frozen in my '04 Acura listening to "The Weary Kind" for the first time off of the Crazy Heart soundtrack, I knew that I was gonna love Bad Blake before I even saw the movie. After listening to the lyrics, I also realized that Ryan Bingham had written the perfect country and western song...and I felt obliged to Jive about it here at Top5. It is nominated for an Oscar and in my mind, no song has ever deserved the accolade more. Keep in mind, I say that knowing that a Springsteen song won the Oscar in the '93 season and another deserving tune by The Boss was later snubbed in '08. I think that the theme to Crazy Heart is better than both of those songs.

Over the course of the last month, The Pop-Culture Know-It-Alls and I ( Pontification Nation?) discussed our favorite movies of the decade with a lot of talk on the greatest performances. I cannot imagine a discussion without mentioning this fantastic, captivating, and charming performance by Jeff "the Dude" Bridges. I wondered if Kris Kristofferson was considered for the role but then guessed that the producers thought that Bridges could play Kristofferson more convincingly than Kristofferson could play himself. They were right.

Every performance chosen by the Academy has that one scene that justifies or solidifies the nomination. It's usually shot in Close-Up. Last year had Mickey Rourke's "I'm a broken down piece of meat." That same year there was Richard Jenkins' "Do you hear me...I mean DO YOU HEAR ME"? A few years before that we had Virginia Madsen telling Paul Giamatti that wine tasted "so f**king good". Bridges and his co-star Maggie Gyllenhaal have that scene too.It takes place in her doorway as Bad Blake's words are delivered with hurt, confusion, and above all...simplicity. It's a brief but emotional scene.

If you're in college and are looking for a fun drinking game with your sorrority or fraternity...when this movie comes out on DVD, try taking a shot every time Bad Blake has a nip. Much like Doc Holliday in Tombstone, Blake will make sure you aren't awake for the Third Act. He drinks a lot of booze....

I've been reading the autobiography of country music legend, George Jones. If drinkin' was an olympic sport, "No Show" Jones would certainly win some sort of medal. I read that he drank so much that he developed multiple personalities. One was "DeDoodle Duck" and the other was "The Old Man". He would talk like each one of them and argue back and forth. Insanity.

For Jones to win a medal in this "sprint to the grave", he would have stiff competition from other famous artists, writers, musicians, actors, politicians, athletes, etc. He would have to win out over such accomplished booze-hounds (in no particular order) such as Humphrey Bogart, Lee Marvin, Jack Keruac, Edgar Allen Poe, Dean Martin, Vincent Van Gogh, Wolfgang Amadeus Mozart, David Crosby, Johnny D., Boris Yeltsin, Winston Churchill, John Barrymore, Ernest Hemingway, Mickey Mantle, Babe Ruth, and John Daly. Let's not forget the women such as Calamity Jane and Judy Garland. George Jones would probobly defeat John Bonham (Led Zeppelin), Bon Scott (original AC/DC) and William Holden (The Wild Bunch, Network) by disqualification since their alcohol consumption directly contributed to their demise. Just for fun, we could have Jones compete with fictional boozers such as Homer Simpson, Barney Gumble, Norm Peterson, and Otis Campbell. To be certain, George Jones could probobly win out over many of these notorious lushes. However, there is one man...I mean one Giant that Jones, nor any other human in the history of mankind could defeat in the Battle of the Booze; that would be Andre the Giant.

Don't believe me? Check out this link at http://www.drunkard.com/issues/10_06/10_06_andre_giant.html . I have a well thought-out theory as to why Andre is The Greatest Drinker in History. If you want to know, ask me in the Comments section and I would love to tell you.

Anyway, back to the country singers....

Anyway...back to where I began. I strongly recommend Crazy Heart for those of you who dig a Strong Character Piece. You are not going to find a better performance than this one. This movie really struck a chord with me (pun!). My favorite line of the movie comes when Bad Blake is asked where he gets the ideas for his songs. "Life, unfortunately", he says. Now that's a great title for a movie I wish I could write - Love Actually's Evil, and Realistic Twin.

BTW, Collateral has been knocked out of my Top 10 of the decade.

Posted by Christopher at 8:45 PM

When I watched Crazy Heart, I could not help but immediately compare it to the Wrestler. The stories are very similar: two washed up "stars" now living on the edges of celebrity, haunted by the usual vices that come with stardom, seeking redemption and "one more shot". Both movies are anchored by a song that seems to almost capture the movie's theme better than the movie itself. And obvioiusly both are an "actor's showcase." I like both movies. If pressed though, I would side with The Wrestler. I liked the ending better and I think, and I may be talking out my arse here, it was directed better. Switch the directors, and I think Crazy heart is a better movie. Agree/Disagree?

Chris, while reading your glowing review of Jeff Bridges, I felt you hinted that this might make a run at your all-time favorite performance. With that in mind, and no top five list to caboose your jive, I thought I'd take matters into my own hands...

4) Bill Murray in Lost in Translation

1) Sarah and Emma Bolger in In America

Shout Out to Woody Allen in Annie Hall, Ryan Gosling in Half Nelson, and Chris Cooper in Adaptation. This was off the cuff, so I reserve the right to change this list...

All time greatest performances? I don't know where to start. This is going to be as unofficial as it can be but I'll give it a shot: Excluding Jeff Bridges, here they are:

I'm going to have to agree with Bronco, and say that I liked The Wrestler a little better. I do wonder if this feeling would be reversed had they been released in opposite order though. As for the song, I thought about it and realized that not since 8 Mile has a song been so beneficial to my enjoyment of a movie. By no means am I saying I wouldn't like the movie without the song, I just feel like both the song and movie add to my enjoyment of the other.

Yes it does...maybe even a contender for the top spot of the decade. It's that damn good.

So Christopher, Would you mind telling us your theory as to why Andre the Giant is the Greatest Drinker of all-time?

Max, I would love to.

First of all, to really get a sense of Andre's drinkin' prowess you must first read the link I posted with my Jive. I now realize that you can't go directly to the desired webpage simply by clicking the link but you could easily find it.

I put a little bit of thought into this and have been anxious to share why I believe that nobody who ever lived could out drink The Giant.

First of all, I have to assume that the Gigantism suffered by Andre had some how allowed him to physically be capable of consuming that much alcohol. I believe that this is relevant bc actual Giants don't know their own strength. Also, Andre was born with twice as many teeth as a normal human. I believe the abnormality of his condition somehow allowed him to be able to consume these astronomical amounts.

So assuming that Gigantism plays a part, how many Giant's are walking around? I did some research and found that 3 to 4 out of every one million are born with some sort of affliction resembling Gigantism. That's not very many people.

Out of the less than 1 percent of people who suffer from this affliction, how many of those even like to drink alcohol in the first place? This narrows it down even more.

Now, out of the less than one percent who suffer from Gigantism and also like to drink, how many of these people are in a profession where they travel from city to city over 300 days a year, partyin night after night? As a pro wrestler, Andre lived in a "party atmosphere" for over 20 years. He developed one helluva tolerance.

So you have to assume that if there were a Giant out there who loved to drink, the chances of them having a profession where drinking every day with the boys is expected is maybe 0.0001 percent.

loved crazy heart and the soundtrack was great....

alright I can quite come up with best performances ever but how about the decade.....

this is just for actors in a leading role.....

1. Daniel Day-Lewis, There Will Be Blood

I heard you know a guy who could out-drink Andre the Giant...

We have not yet seen it but it is on the Netflix list. Can't wait to get it in and I was cheering for "the dude" capture the oscar. So glad he did.

Ok, I finally got to the theater to see Cray Heart. Great film! I'm definately going to buy this one when it comes out. I thought Bridge's porttrail was great, a hardened, washed up, selfabsorbed country singer. Also, I have to agree Chris, the line about his songs coming from life unfortunately was very fitting.