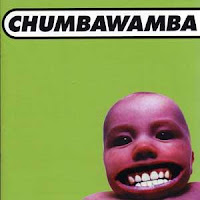 If the "only one song by a single artist per disc" rule is to be abided by, then I would probably use your compilation and only have to make minor adjustments to make "Danny's ...." compilation.

A couple of additions/substitutions for a "Danny's..." collection:
*Green Day - Longview
*Toadies - Tyler
*Foo Fighters - Everlong (one of my favorite songs of all time)
*Smashing Pumpkins - Mayonaise (I'd venture that even the staunchest of non-Pumpkins fans could at least stomach this song, if not appreciate it - at least in the context of this list)
*Fuel - Shimmer
*Creed - Torn (At the risk of losing any credibility on this post. But to be true to my 90's experience I would have to include it.)

So glad to see Interstate Love Song on the list.

It's funny to see Santaria on the B-sides list, as any other memories I probably previously had associated with that song have been recently overwritten by Jim exclaiming "THIS IS A MOMENT! THIS IS A MOMENT!" in Bostock's that night when an impromptu sing-a-long happened amongst several Gordon Alumni.

Also, wow, how hard is it to pick a Matchbox 20 song? You can almost just thorw a dart at the cd cover and whichever it lands on just roll with it and no one would be the wiser.

Lastly, I know one of your goals in film is like Scorsese to never pull any punches, and it takes a courageous discographer to add MMM Bop onto a compilation, albeit a B-Side. Now that is not pulling any punches (or even flailing bitch slaps).

Anyway, for me I've said it before that the 90's were "The Golden Age of Entertainment", and this compilation plays like a soundtrack to our lives.

"Courageous Discographer"...that's right on. How courageous would I have been if I included "As Long as you Love Me" by the Backstreet Boys? You have no idea how close that song came to making my list. I agree that it was hard to pick Matchbox 20 songs but not nearly as hard as choosing those from Pearl Jam.

The Smashing Pumpkins is the biggest ommission from the list. Also, Closing Time by Semisonic would have to be on the list--it was played non-stop at the time the class of '98 was graduating.....

I was privileged to receive your great "Musical Journey in 2004 and I still listen to it today. It was great! Love it!