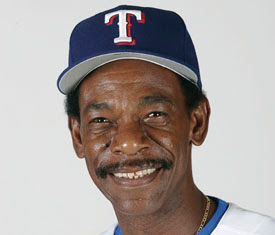 If you were to ask me in early April whether or not I believed the Rangers had a snowball's chance of making the playoffs, my answer would have been quite pessimistic. Like Coach Jim Mora, I would have hoped that they could just win a game. Like I wrote in my April 6th Jive, I had "blind hopefulness" that this was the year. But being the realist that I am, I knew that it was nothing but wishful thinking. I can't believe that it is early September and we are still in this thing. It's gonna be tough without Michael Young for two weeks but I gotta feeling it's gonna go down to the wire. There's no telling how many Winston's Ron Washington is gonna smoke this month. there is no doubt that we have a good team. We have......

Ian Kinsler - He is going to end up a 30-30 guy. Few second baseman's have ever done this.
Elvis Andrus - We have found our starting shortstop for years to come.

Chris Davis - It was very beneficial for him to go to the minors and work on his mechanics. I said it before and still believe it...he will be a star one day.

Hank Blalock - Thanks for the memories. I'm sure Frank thanks you for paying for his Grad school.

Pudge Rodriguez - It's good to have him home. He should play everyday.

Taylor Teagarden - You can't hit 190 and expect to be the starting catcher...especially when the catcher on the bench is a first-ballot hall of famer that can still go.

Josh Hamilton - Someone told me that as soon as he gets red-hot, the Rangers should trade him. Sadly, I agree. With his relapse in January, "The Bone" is just too big of a risk. BTW, I've never seen a single's hitter who can hit the ball 600 ft. Very strange.

Marlon Byrd - There has been talks that the Rangers will not attempt to sign him next year. I think that is a bad mistake. He's a spiritual leader who leads by example. The Rangers need him.

Nelson Cruz - It took him 30 years, but he finally got it together. He's a big threat in the line-up and I hope this year is not a fluke.

Andrew Jones - Nice comeback...better smile. Thanks for stopping by.

David Murphy - The "Murph-Dog" is a quality ball player. I would still let him go before Marlon.

Julio Borbon - This guy is very impressive. Could he be then next Rickey H. Henderson?

Omar Vizquel - I've never seen anyone play the infield so effortlessly. I think he should be resigned for next year.

C.J. Wilson - He hasn't made me nearly as mad as he has in the past. He's having a decent year.

Scott Feldman - He's probobly the best pitcher on the team.

Kevin Millwood - You get a lecture from Big Tex and you'd straighten out too.

Derek Holland - Ol' Meatball has had no-hitter stuff a few times this year.

Frank Francisco - He was dominating before his illness and injury. It looks like he's gotten it together again. If he doesn't, I'm sure everyone will boo him out of town like they did CoCo.

Ron Washington - Give that man a smoke.

Posted by Christopher at 6:31 PM

Darren O'Day deserves a shout-out. Not only has he pitched well, but every time he comes in, the crowd gets a good "O'DAY" chant going like the "OLE" chants in soccer.

and your wrong about chris davis.....

Of course he's not a hall of famer yet. I agree he's gonna need 3,000 ...which could be reached in 10 years. The talk is that Craig Biggio is a hall of famer. If this assumption is correct, I think this gives Young a very realistic shot. And for being wrong about Chris Davis...we will see. I'm sorry, I will see. U don't watch...

I have to say that no matter what happens the rest of the year, the Rangers have gone above and beyond my expectations.

I'm not a selfish fan. I don't ask to win the championship every year, because I know that isn't being realistic. I just want a team to root for and keep me entertained the full length of the season, and at the end to at least have a shot at winning the title. The Rangers have done that.

Probably the most enjoyable season that I have had as a Rangers fan. The winning certainly helps, but also the guys just seem to like each other and have fun playing, which is contagious as a fan.

Don't know what to say Dawsons, except that you guys are missing out. Stop downloading obscure indie music and turn on the most exciting team in town.

Advantages: Will be able to discuss the Ranger with the likes of Joko and Staley.

Disadvantages: Lose all the rapport I've been building over the past decade with the cool indie chicks.

Advantages: I won't have to root for one of the worst franchises in sports. Probably end up marrying the coolest indie lawyer in Dallas.

Rapport is very important to establish. However, it would add a whole new aspect to your arsenal if you could talk Ranger baseball with some sports fanatic-hotties that are in the know. U would be dangerous with that degree of versatility...

Situation: Sitting at a bar with Joko and Staley. You are so engrossed in conversation on baseball that you avoid even so much as making eye contact with members of the opposite sex.

Advantage #2: No expections or pressure to engage in social interactions with women, thus no possibility for disappointment or rejection.

Disadvantage: That cool Indie lawyer over by the juke box probably won't come introduce herself to you (indie chicks don't like sports) starting a whirlwind romance leading to marriage and you being able to quit your job and stay home all day while she brings down over $100 grand a year.

But, in actuality, maybe you could do both. Watch the rangers and download obscure indie songs at the same time. Then, in between Joko and Staley's bathroom breaks you could walk over to the jukebox, play that obscure indie song that clues the indie lawyer in on your vast knowledge of the indie rock scene, ultimately leading to your whirlwind romance, marriage, and you living the life of househusband.