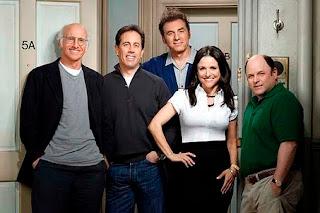 The finale of Curb Your Enthusiasm is airing tonight in what has been a very enjoyable season that reunited the cast of Seinfeld for the first time in 11 years. Some thoughts:
1) At the age of 48, Julie Louie-Dreyfuss is hotter now than she was in the 90's.

2) Curb relies heavily on improvisation and Jerry is very good at it.

3) It is great seeing Michael Richards on T.V. again.

Seinfeld is my favorite show of all-time so instead of watching the Cowboys and their non-existing offense, I figured I will list my Top5 episodes. They are......

5. "The Summer of George" - George takes the summer off, Kramer wins a Tony and sees the sun rise at Liza's, Elaine tells a co-worker that she needs to swing her arms when she walks, and Jerry dates a girl who has a Dude named Lyle living with her.

4. "The Serenity Now" - Frank Costanza tries to sell computers from his garage with the help of George and Loyd Braun, Jerry's girlfriend wants to see him get really mad, Elaine has "shiksa appeal", Kramer enjoys "the cool evening breeze of Anytown, USA", and George divulges his deepest, darkest fears and everything he's capable of.

3. "The Frogger" - George and Jerry return to their high school hangout where George discovers he still has the high score on the old Frogger video game, Elaine eats a cake that came from King Edward VIII's 1937 wedding, Jerry fears a serial killer known as "The Lopper" while Kramer suggests they name him "Son of Dad."

2. "The Little Jerry" - This aired on my 17th B-day. Jerry passes a bad check, George dates an inmate, Elaine dates a bald guy who shaves his head for swimming purposes. The fact that he chooses to be bald offends George who says "that's like using a wheelchair for the fun of it." Kramer accidentally buys a rooster instead of a hen and names it "Little Jerry Seinfeld." He then enters it in a cockfighting competition.

1. "The Voice" - Kramer gets an inturn from NYU, Jerry has to decide whether he should lose the voice or the girlfriend, Elaine backslides into another relationship with David Puddy, and PlayNow negotiates with George ("I'll see you in Hell, Costanza".)

Shoutout to "The Yadda Yadda" episode

Here's George in a nutshell....

Selecting my Top5 Seinfeld episodes was like picking which Beatles' songs are the best but I think I successfully narrowed it down to where I'm satisfied with the list. Thanks Wikipedia.

BTW, while I'm on the subject of television:
Top5 T.V. characters....

Posted by Christopher at 3:06 PM

Great episode picks. Loved everyone of them. All are better than the overated soup nazi episode.

HOWEVER, you really need to watch The Wire and Arested Development. All characters from these shows would make up my top 10 characters. Plus David Brent from the British Office.

I've come to realize that most of my favorite Seinfeld episodes are usually one's where I think George has an especially good story line. With that being said, I think "The Little Kicks" and "The Abstinence" would get at least a shout-out in my top 5.

As for top 5 favorite tv characters, I'd have to go with:

I would also have to give a shout-out to Ben Linus from "Lost".

Best of Decade lists are slowly filtering through so since we are on the subject of TV, I thought I'd share a a couple of lists from two of my favorite sources:

I think when its all said and done the consensus top 5 shows of this decade will be The Wire, Arrested Development, Sopranos, The Office, and Mad Men/Lost.

I'm only through season 1 so far, so I need to see some more before I can justify that kind of placement. However, I don't think it's too early to list him on my personal heroes list right along side JFK, Martin Luther King jr, and Kyle Dawson.


Seinfeld is such a great show b/c:

no serious love interests
no serious topics
no real emotion

this same pattern was taken by arrested development and it was terrific.

5. The Chicken Roaster
4. The Rye
3. Kramerica Industries
2. "Your Batman"
1. The Marine Biologist

I cannot say what my top Seinfeld episodes would be because I have not seen enough episodes to make an all time favorite list. Up until about a year ago I was not even a Seinfeld fan, so I have some catching up to do...
However, I do agree with Michael Scott being in the top characters of all time. Also, Ari gold. Not real sure who my other characters would be, I LOVE Friends, so I would probably throw one of them in there, which I am sure would disgust most of y'all if y'all are avid Friends haters like Joe is...I would difinitely put Sweet Dee from It's Always Sunny in my top Characters, she can really crack me up. I would have to finish this list up with Liz Lemon, from 30 Rock.

Characters in no particular order:

Johnny Drama - Scene stealer if not show stealer. This was between him and Gob (Arrested Development) but decided with Drama because I haven't seen every episode of AD and didn't think it right of me to classify without watching complete body of work.

Coach Taylor - I want to emulate him in almost every way.

Peter Griffin - Great show. If you haven't watched it, you should.

Homer Simpson - but just early to mid nineties Homer. He has got to the point now that he is just a complete idiot and the show is hard to watch.

Hey Everybody! It's been awhile since I've graced these pages but figured I had to throw in my two cents. I am not such a good "Seintologist" to list my Seinfeld episodes; but I do put the show #2 on my all time list (after The Simpsons.)

But anyway, these are my favorite TV characters in no particular order..


--George Costanza (Seinfeld) - There's nothing I can add that wouldn't be obvious from reading this thread.

--Cliff Clavin (Cheers)- This should come as no surprise as he and I share so much in common...beer, celibacy, mothers...

--Al Swearingen (Deadwood) - What a mean, tough S.O.B. Nobody in the history of television could string together such creative expletive-laden soliloquies (and drink whiskey all day long) the way that bad bad man could.

--Vern Schillenger (Oz) - Simply put...the worst excuse for a human being that can be imagined...a Nazi, a rapist (of men), a murderer, a child abandoner, a gang leader etc. But as played by the awesome actor J.K. Simmons; damn he was entertaining. And no one could utter racial epitaphs like ol' Vern.

--Barney Fife (Andy Griffith Show)- One TV character whose departure from the series totally ruined the whole show. Maybe the funniest character to ever grace the small screen.

I suppose it's time for me to give Arrested Development a day in court. It seems like this is a popular show among the intellectual/pop culture elite.

Lyle, I agree w/ your thoughts on Homer. The Simpsons should have went off the air 10 yrs ago.

Franker, I've never written these three letters in response to anything but your comment on Cliff Clavin receives an "lol". Good stuff.

Andrea, I envy you. I would love to experience Seinfeld all over again for the first time. It would be like someone giving me the Johnny Cash Anthology and telling me to have a listen to see if I liked it.

From an old man who long ago for the integrity of a good pop culture conversation removed himself from the inner circle of the elite, I have to chip in here and echo the sentiments for Michael Scott.

Because Michael Scott is portrayed by Steve Carrell, I was actually turned off of the show for quite a while. I thought it was going to be just a one dimensional Evan Baxter type character, but I got tired of hearing friends OVER AND OVER having the discussion about "DID YOU SEE THE OFFICE?? Oh, wait, you don't watch it." So I finally gave it an honest go and started the entire show from the beginning and it didn't take long before I was cursing myself for missing out for so long.
Michael is one of the most developed characters, sometimes it's incredibly uncomfortable, sometimes annoying, sometimes repulsive, sometimes inspiring, often pathetic, but most of the time you just want to give him a hug. (That's what she said.)

Huge shout-out to Dwight K. Schrute for being EXACTLY like someone I used to work with at a previous job.

Relating to The Office, I was in the exact same boat you were in. I heard everybody talking about the show but for whatever reason never got around to watching it for the longest time. But, like you, once I saw it I also cursed myself for taking so long.

And to all of those people who told me about Arrested Development, I recently started watching the reruns that are now shown on IFC and was HOOKED after just one episode. What a wonderful show! It totally lives up to all the (considerable) hype. I just hate that there are only three seasons out there for me to catch up on.

Included among Arrested Development castmembers is "the great" Jeffrey Tambor, who's character "Hey Now" Hank Kingsley on the Larry Sanders Show could certainly qualify as one of the best characters of the 90s.

Ok, question for everyone, would you say that the Larry Sanders Show broke the ground for HBO original programming? And don't anyone dare bring up Tales from the Crypt.

I would say that yes, the Larry Sanders show was groundbreaking as far as setting the standard for cutting edge TV that couldn't be shown on network TV. BUT, Garry Shandling had a show prior to this in which they "broke character" so to speak and the actors acknowledged the audience at home. As far as I can remember though, Larry Sanders was the first HBO series that gained mainstream recognition. I think Rip Torn and Jeffrey Tambor were nominated or won several acting awards but I'm too lazy to look it up.

Somebody correct me if I'm wrong here b/c I'm kind of typing this in a hurry.

Also, I may be biased because I loved the show so much, but I think OZ was groundbreaking in the same regard because of its "hard-R rating" with graphic violence, male nudity, language, and sexual content. I know that in the late 90s that was the first time I was aware that a TV program could be like that.